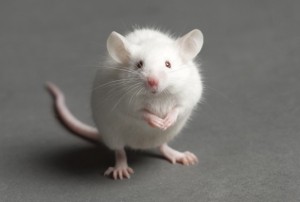 This may sound like a provocative question to some. After all, most of us like to believe that we are master of our own destiny and that we can create our own futures. But new research has revealed again that this may not be the case after all.

Scientist discovered that certain emotions experienced by mice can be passed down to their offspring because of changes in DNA. The researchers learned the mice to associate the fear of an electric shock with a scent of cherry blossom. It turned out that later generations of the mice seemed to have inherited the fear of the blossom’s scent, even though they weren’t exposed to any electric shocks.

This strange phenomenon is due to purely genetic modifications. Epigenetics is a relatively new and exciting field of genetic science. It is the study of heritable changes in gene expression that are not encoded in the DNA of the genome. Instead it is mainly focused mechanisms that switch genes on or off. It turns out that certain environments or experiences may trigger the activation of these genes.

“Depending on the environment an organism finds itself in, that gene might be turned on or off,” according to Brian Dias of Emory University School of Medicine in Atlanta.  “It behooves ancestors to inform their offspring that a particular environment was a negative environment for them,” Dias said.

He and his colleague Dr. Kerry Ressler, who conducted the study, found that the mices’ pups were more sensitive to the cherry scent their parents had been trained to fear. They were able to detect it at low levels and avoided going near it for most of the time. Even more interestingly, the grandpups of the mice that were exposed to the electric shocks and the cherry scent, showed the same odor sensitivity, suggesting that it’s not something they learned from their parents.

This was confirmed by the finding that the amount of a known chemical recpetor in the brain for the cherry blossom was greater for the first two generations of descendants of the mice which learned to fear the cherry scent than for descendants of mice who hadn’t been exposed to the same scent.

Wolf Reik, a genetecist at the Babraham Institute in England said in a statement that this kind of results are encouraging as they suggest that transgenerational inheritance exists and is mediated by epigenetics. But he warns that one cannot merely extrapolate such findings to humans and calls for more careful mechanistic study of animal models.

These studies suggest that the  nature versus nurture debate is actually a non-debate. And it’s thrilling to read that science finds proof of what we therapists regularly see while working with family constellations: the traumas of our ancestors are carried over generations and influence the life of their children, grandchildren and even further on. They manifest in our lives as so-called ‘subconscious loyalties’.

Take for instance the striking example a sixtreen-year-old boy who suffered from self-mutilation. The self-mutilation stopped the day after his parents discovered in a family constellation that their son carried the trauma of his father. The father had lost his own father in a car accident at a young age and never processed his grievance. During the constellation it became clear that this unprocessed pain was carried by the son and triggered the desire to feel pain, the same pain his father was not able to process as a child.

Any constellation practice is abundant with such examples of inherited pain and suffering. It is an incredibly grateful experience to help people to discover the source of their pain and suffering, as it is the most vital step towards healing our lives as humans, and by extension, to healing our world.